Zkittlez marijuana strain is the package every stoner would like to be associated with. The amazing flavor, high potency, and sweet aroma give Zkittlez an edge over other cannabis strains. It is gaining high popularity following the decriminalization of recreational marijuana in many states across America. Whether you are a novice or established marijuana, Zkittlez is definitely the go-to brand. Here is a quick look at the composition of this indica-dominant strain:

What is Zkittlez strain?

Zkittlez is a hybrid of grapefruit sativa and Grape Ape indica. It is famous for its striking flavor, aroma, and potency, which is only comparable to candies and skittles. Given the source strains, you can only expect to get a strain with a fruity taste.

Zkittlez has a high potency that is evident from how fast it takes to manifest its effects. The effects also last for a longer period, making this strain the best companion on a lazy weekend. Can Zkittlez give the highly revered “high” effect? You wouldn’t expect a compromise from such a potent herb.

One of the features which make Zkittlez unique is its unique irresistible taste. A single puff of a joint made from Zkittlez will give you a combination of berries, grape, and lemon. This combination of flavors can only be compared to the sexy rainbow colors. Inhaling the thick smoke gives you the real taste of rainbow flavors, which goes beyond and above what other strains can achieve.

When you exhale, the smoke comes with a flavor of lemon, berries, and grape. However, the taste of grape becomes more overwhelming as the last smoke escapes the nostrils and mouth. Partly, this is due to the high concentration of the Grape Ape, which is the primary strain in Skittlez. The taste remains in the mouth for a long time after smoking.

Zkittlez cannabis strain features a unique sweet aroma. Inhaling smoke from the Zkittlez joint gives a sweet fruity aroma, which can only be compared to candy. Nevertheless, you also get a sweet aroma of skittles as the smoke flows through the nostrils. The Zkittlez aroma is overwhelming, with a combination of different fruits.

When you grind the flower buds from Zkittlez, an aroma of sour notes comes out of them. The aroma is a combination of the sweet fruity taste and sour taste. The aroma is so strong and tempting in such a way that you ingest it orally rather than smoking. Despite the strong aroma, Zkittlez has a smooth smoke, made of sweet-sour fruity combo. The best way to get the full aroma of the Zkittlez strain is to inhale and exhale slowly in a gradual manner. Using this strategy gives you the opportunity to tap into the hidden gem of the fruity aroma.

The popularity of Zkittlez can be linked to the high THC potency. Most hybrid strains contain an average of 12% THC level. O      n the other hand, Zkittlez has a mean of 13.5% THC levels, which can be classified as above average. However, this THC potency level can go as high as 23%, especially if optimal cultivation requirements are observed.

Growing Zkittlez under optimal conditions yields buds with high THC levels. When you smoke Zkittlez marijuana, the THC gets into the brain, leaving behind a heavy cloud of euphoria, happiness, and unmatched confidence.

As aforementioned, Zkittlez is a crossbreed between Grape Ape and Grapefruit. The former is an indica strain, while the latter is a sativa. Indica accounts for about 70% of Zkittlez, while the sativa contains 30%. Overall, the indica strain occupies most of the Zkittlez, giving the long-lasting effects. The sativa percentage acts as a relaxing agent in this hybrid, and this is evident from the relaxing effects.

Zkittlez cannabis grows best in hot areas with high humidity levels. However, due to the sophistication in technology, you can grow this plant indoors and get a similar harvest. During low night temperatures, the purple hues develop at a faster rate to form buds. On the other hand, the high temperatures during the day allow the buds to optimize the potency levels.

Zkittlez starts to produce buds from week 8 to 10 after planting. Once the buds are mature, you can expose them to a higher temperature to increase the potency levels. It also makes it easy for harvesting.

Getting seeds for Zkittlez is impossible. However, you can buy clippings from a mature marijuana plant and grow them. Although there are seeds available online, their quality cannot match that of the mature plants. Besides, the quality of buds obtained from the Zkittlez buds is more predictable. Instead of getting high-risk seeds, you can get the clippings and maintain them until they mature.

You can identify Zkittlez strain from a distance due to the outstanding color patterns. The buds contain a mixture of purple hue and light green shades, which makes this strain attractive A closer look at the strain will reveal to you trichomes with white color. The plant also contains soft fur throughout.

The leaves in Zkittlez are small and delicate. You will also observe that the leaves are covered in the white trichomes, giving them an exceptionally soft touch, which is rare to find in most marijuana plants. Therefore, besides the unique sweet-sour taste and flavors, Zkittlez is visually beautiful.

When you smoke Zkittlez marijuana, you might experience several effects. These include:

Euphoria– You are assured of getting a head-high effect after smoking Zkittlez marijuana. The high THC levels contribute to the “high” effects.

Calmness– When you take a puff of Zkittlez marijuana, the sativa strain reduces the intoxication of the indica strain. Due to the varying chemical makeup of different people, the severity of calmness might vary from one person to another.

Paranoid thoughts– The high THC levels in Zkittlez might increase the euphoria beyond the normal levels. This might cause you to get panicked thoughts or panic attacks.

Dry mouth– Dry mouth is a universal side effect in all marijuana plants, and Zkittlez is not an exception.

Headache and dizziness– Taking large amounts of Zkittlez than what the brain can accommodate might result in headaches or dizziness for a few hours.

If you are looking for the most potent marijuana strain with long-lasting effects, choose Zkittlez. The combination of mental and body high effects of sativa and indica are unmatched. The calming effect is what every loner would want to try. If you have not tried this strain, you are missing a lot of fun. Put Zkittlez in your bucket list of marijuana strains to try, and you will get hooked. 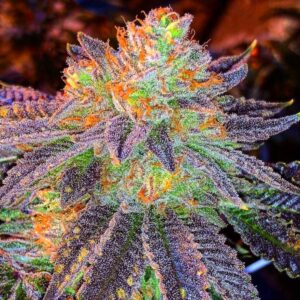